Controversial Yoruba actor and producer, Yomi Fabiyi, has bragged about his gender on social media.

According to Yomi, he is special (an akanda) as he is a combination of a man and a woman (hermaphrodite)

This comes after he was slammed with a 100 million naira lawsuit by Iyabo Ojo for accusing her of threatening to kill Baba Ijesha if he’s released on bail.

Kemi Filani News earlier reported that Iyabo Ojo served Yomi Fabiyi a paper from her lawyers requesting a cease and desist, retraction and a fine of 100 million naira for Yomi Fabiyi.

However, Yomi mocked her, saying it’s a mere civil suit and she’s only wasting her time and money.

He has now shared a screen shoot of his chat with Iyabo before the saga went south. According to him, Iyabo should be careful less he hits her. As he can use jazz and he is a combination of both a man and a woman.

“you should know I be AKANDA. I AM A COMBINATION OF a woman and a man. I don’t want to come for you.” part of his reply reads.

Read his full reply below:

“Na jeje I seat down, you jumped on my harmless post and subjected me to CYBER BULLYING which you Iyabo confessed to and invariably apologised.

You didn’t serve me letter(ADR) but posted on social media. I realised some of your fans don’t know the meaning and most likely you too.

Iyabo, I care so much about you and I am having restraint not to hit you since, if I fight you, as in tin ba gba e mu, you gonna see craze. Don’t let anyone push you, they don’t know where we both coming from. If you press too much I will turn, all jazz and asasi from wherever no kuku work, you should know I be AKANDA. I AM A COMBINATION OF a woman and a man. I don’t want to come for you.

Go and see how you can help Princess with the imminent criminal charges coming to her when the court resume.

Iyabo stop now, don’t cross the RED LINE. Use your money to eat and buy your tiktok costume. 100 kobo una no go see. Go and equip yourself with law and human rights, don’t think you can crush one activities to become one activities … Ko jor. 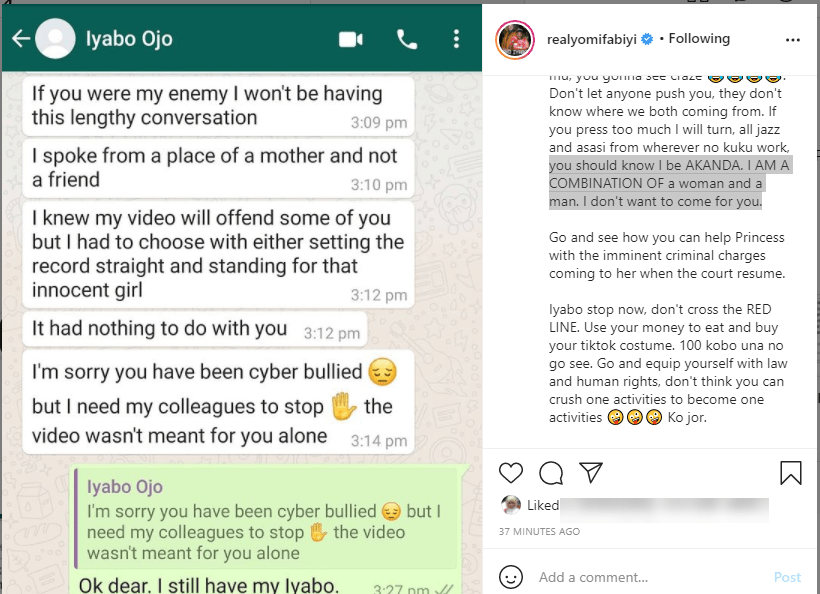 “There Are Israeli Arabs And Palestinian Christians” – Reno Omokri Says Israel And Palestine...

Bayern Announce They Are Not Participating In The Super League

TV Exposes You For The Person That You Really Are – Wendy Williams Shades...

Davido Surprise Her Daughter, Imade, With A Multimillion Range Rover For Her Birthday