Verphy Kudi’s daughter Asiah perished in a flat at a ‘supported housing’ block in Brighton in December 2019 after being left alone for six days with no food or water.

A serious case review has been launched into the 20-month-old baby’s death after she was abandoned by her mother who went to London, Coventry and Solihull to celebrate her 18th birthday.

Now, it has been revealed Kudi tried to sell concert tickets on Twitter on the day the baby’s body was found. Another tweet showed her attempting to become a Pretty Little Thing model months after Asiah’s death.

Kudi’s flat was one of eight in a residential complex run by charity YMCA DownsLink to house vulnerable young families on behalf of Brighton City Council.

YMCA DownsLink staff are located at the entrance to the block at all times. Residents with social workers can receive visits but because the flats are independent units YMCA staff do not enter the living areas or carry out regular inspections.

Baby Asiah did not have a social worker. Kudi has repeatedly gone missing since the age of 14 and been the subject of numerous police appeals. MailOnline has asked the council if she had a social worker at the time of her baby’s death.

Brighton and Hove Safeguarding Children Partnership (BHSCP) – an association of council services, police and NHS – has launched a serious case review into the case.

The mother, now 19, was seen on CCTV leaving the flat on her birthday before attending parties in London, Coventry and Solihull – more than 150 miles away in the Midlands.

A post-mortem examination and forensic tests found that Asiah starved, was dehydrated and developed flu. Her cause of death was given as neglect.

Today, Kudi appeared at Lewes Crown Court to enter a guilty plea to manslaughter as her father watched on. Speaking after the hearing, Muba Kudi, 59, said: ‘My heart is so broken. My daughter was missing. She had been missing since the age of 14.’

Kudi is seen in handcuffs outside Lewes Crown Court, where she was remanded in custody after pleading guilty to manslaughter 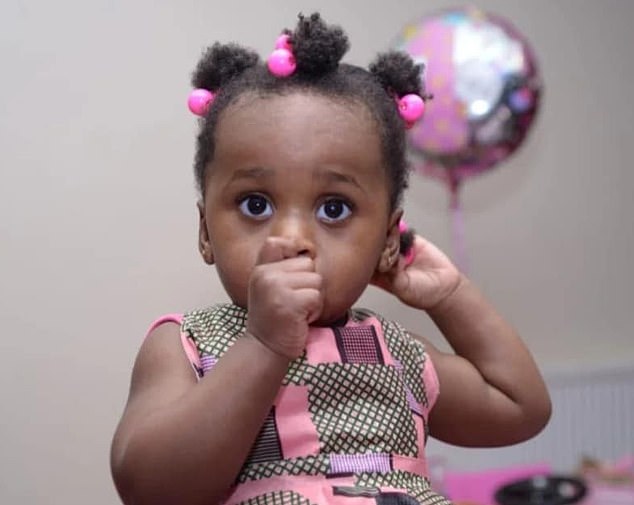 A post-mortem examination and forensic tests found that Asiah starved, was dehydrated and developed flu. Her cause of death was given as neglect 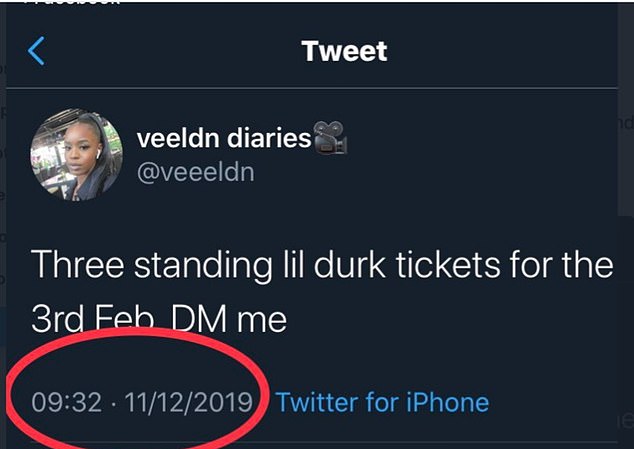 Verphy Kudi tweeted this message on the same day her baby’s body was discovered, trying to sell concert tickets

Kudi’s sister, Aisha Batrane told MailOnline: ‘This whole situation has completely broken my family. It might be entertainment for the rest of the world but it’s totally shattered us.

‘We are heartbroken and angry at how Verphy behaved. Verphy had been estranged from the family for quite a long time and we had minimal contact with her.

‘We have spoken to her and we’re still not clear what she was doing for those six days, who she was with and why she left like that? Who the hell knows? We can’t understand it.

‘As a family we now want to be left alone to grieve and try and understand what’s happened.’

This morning, the judge ordered that all social services records relating to the case be disclosed to the defence ahead of sentencing.

The court heard how, after returning home from the party spree in December 2019, Kudi called 999 saying her baby would not wake up.

Asiah was taken to Royal Alexandra Children’s Hospital in Brighton but was declared dead on arrival.

Today, Kudi held her hands to her face after the charge of manslaughter was read to her. She spoke only to answer guilty to the charge and confirm her name.

Wearing a plain black top and black trousers with a blue medical face mask, she wiped a tear from eyes as her father looked on from the public gallery.

His daughter waved at him from the dock when court staff pointed him out.

She had been living at the flat in Brighton with her mother where they had been housed by social services since September 30, 2019.

Cameras showed Kudi leaving the building on December 5 at 5.39pm. .

She did not return until December 11, when at 6.06pm she dialled 999 telling a call handler her baby would not wake up.

A few days later, staff at the Brighton mother and baby unit for teen mothers where they had been living contacted police after reviewing CCTV footage.

Data gathered by Sussex Police showed Kudi had been at parties in London, Coventry and Solihull before returning to Brighton.

Kudi admitted the manslaughter of her daughter between December 4 and 12.

Asiah was pronounced dead on arrival at the Royal Alexandra Children’s Hospital in Brighton on Wednesday December 11. 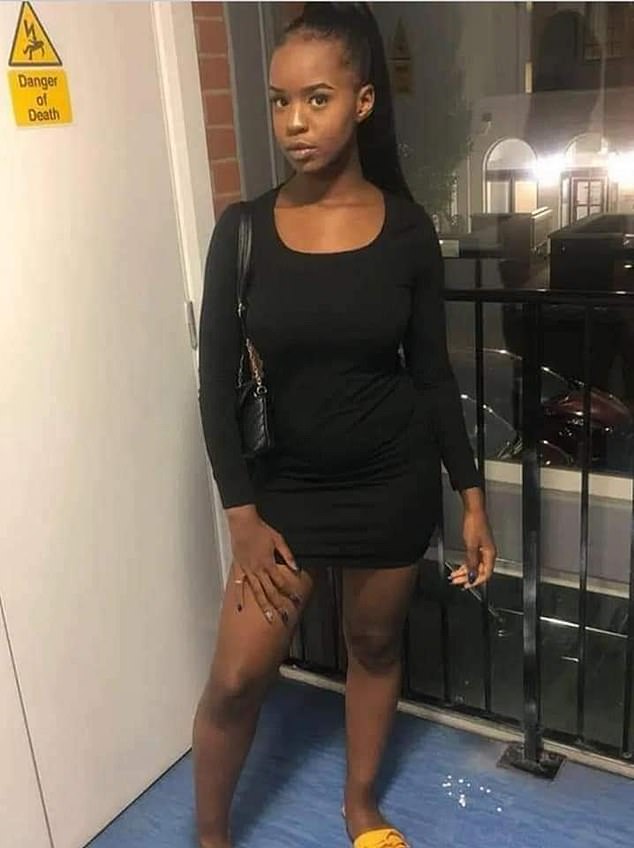 Today, Kudi spoke only confirm her name and enter the guilty plea. She is seen in a photo posted on social media

Judge Christine Laing QC told Kudi: ‘You have heard that before I get to sentence you the defence want to get a report on your behalf and a doctor will no doubt make arrangements to see you and interview you over the next few weeks.’

The case was adjourned to a provisional sentencing date of May 28, but Kudi was warned this may be delayed.

Data gathered by Sussex Police showed Kudi had been at parties in London, Coventry and Solihull before returning to Brighton

Brighton and Hove Safeguarding Children Partnership (BHSCP) said: ‘We are deeply saddened by the tragic death of Asiah. In our safeguarding role, we will work with our partners to look into what has happened and carry out a Child Safeguarding Practice Review.

‘This includes working with our partner Sussex Police to make sure our review is carried out in support of or alongside their ongoing actions in this case.’

YMCA Downslink said: ‘This tragedy has shocked us all. Our staff, particularly those who work the complex, have been and continue to be, deeply affected by it.

‘Verphy Kudi and her daughter, Asiah had been living at the independent living flats, for 11 weeks, when Asiah died.

‘We will be working with the Safeguarding Practice Review to understand any lessons that can be learned from this tragedy.

‘Our sympathies and thoughts are with the family and everyone affected by this tragic event.’

YMCA DownsLink was handed a three-year contract worth £336,000 by Brighton council to run the accommodation, starting on Sunday 1 September 2019,

The contact offered a ‘medium’ level of support for families, with all flats self-contained with their own kitchen, space for staff on duty, and a communal area for group activities.

It is not clear whether any staff visited the unit while Asiah was there alone. 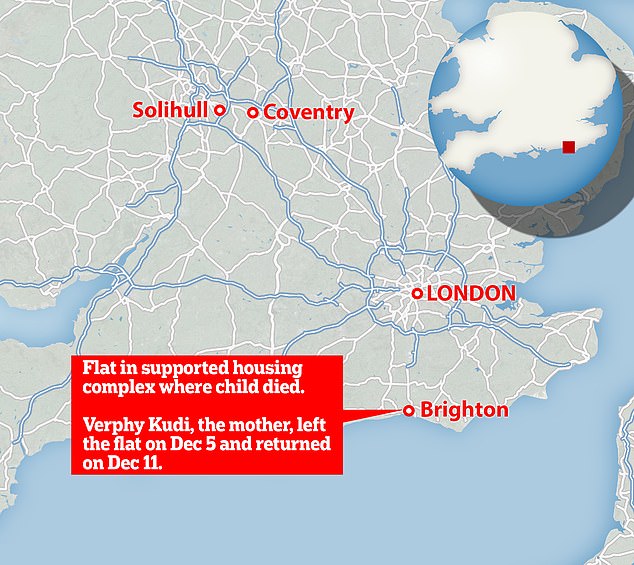 The service used to be run by Peabody, which still owns the building and currently leases it to the council.

Family Mosaic Housing, which later merged with Peabody, paid £15.5 million for the flats in November 2014.

The Senior Investigating officer, Detective Chief Inspector Andy Wolstenholme, said; ‘This was a particularly distressing case for my team and me to investigate, and has caused great sorrow amongst Verphy’s family and the many agencies that have supported Verphy and Asiah.

‘We note the guilty plea entered in this case, and continue to prepare for Verphy’s sentencing in May.’

A council spokesperson said: ‘We have been deeply saddened by this tragedy.

‘The case is currently the subject of criminal proceedings, and the city’s Safeguarding Children Partnership is also conducting a review of the circumstances in to the tragic death of this young child.

‘We are undertaking an internal review, which will feed into the partnership review.

‘We have fully supported the police investigation, and are committed to working with the Partnership in its review and taking learning from this.

‘Asiah was not on a child protection plan and was not involved with social work services when she died.

‘It would not be appropriate for us to comment further while the criminal proceedings and reviews are ongoing.’

JUST IN: Buhari’s Government Apologises to All Nigerians, See Reasons (Details below)

You Are My Hero – Nollywood Actor, Baba Tee Thanks Funke Akindele For Making...

‘God Will Bless The Work of Our Hands’ – Ini Edo Prays For Her...