According to reports, Pastor Dare, 42 died in his sleep on Wednesday in Eket, Akwa Ibom State, where he was staying with his family.

It was gathered that the Assistant Pastor in Charge of Region (Youth) 35, had ministered the previous day.

According to the wife of the deceased, Temiloluwa Adeboye, she realized her husband’s unusual sleeping hours and couldn’t get him on phone. She allegedly alerted her neighbours and he was found dead. It was said that the deceased was neither ill nor on medication before the unexpected happened.

“He was not sick and did not complain of anything before the incident. Pastors in the church were summoned to pray for him, all to no avail,”

Confirming the incident, several leaders of the church said they couldn’t talk speak on it.

He said, “It is true. The incident happened in Eket where he was based. I don’t have the details for now. Maybe before the end of today, we will issue a statement.”

In June, Pastor Dare would have turned 43 year old. Recall that on his 42nd birthday, his father, Pastor Adeboye celebrated him on social media where he described him as his first miracle child. 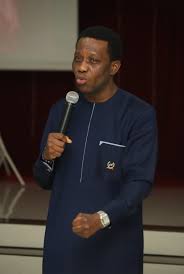 He wrote on his Facebook page, “Our first miracle child. We pray that God will keep his miraculous working power in your life and all those who need a miracle today, will use you as a point of contact for their own in Jesus’ name. (Amen) love from Dad, Mom, and the whole Adeboye dynasty.”

Dare left behind a wife and children.

May his soul rest in peace.

Tinubu Gives Some Important Steps On How To Resolve Herders And Farmers’ Crisis (Details...