Top Naija reports that operatives of the National Drug Law Enforcement Agency, NDLEA have busted an online drug trafficking cartel that sells drugged cookies, cakes, brownies and all sorts of illicit substances to residents of Abuja and beyond, using the cyber space as its platform.

Director, Media & Advocacy, Femi Babafemi, who disclosed this in a statement on Sunday, May 9, said five members of the organised drug criminal group were arrested during sting operations carried out between Friday 7th May and Saturday 8th May, 2021 by officers of the FCT Command of the Agency during which different brands of illicit drugs were recovered from them.

The nabbed drug dealers include Queen Nvene, Collins Ozoemena, Samson Peter, Chika Nvene, and Habila Musa. The group specialises in clandestine production of drug based cookies, brownies and other edibles; markets and sells same online, through their Twitter and Instagram handles. They also market and sell all types of marijuana; Arizona, Colorado and Loud, among other illicit drugs, online.

While Queen Nvene, a graduate of Business Administration, produces drug cookies and brownies and sells same on Instagram, Collins Ozoemena sells all types of illicit drugs, especially Loud and skunk online. Samson Peter on the other hand, is the manager of SK express courier company, who manages motorcycles and dispatch riders to deliver illicit drugs from Collins and drugged edibles (cookies, cakes and brownies) from Queen and Chika, both sisters. Members of the cartel operate from different locations within the Federal Capital Territory, FCT, but operate as a network.

Their arrest followed online orders of drug-based edibles by undercover agents. Supplies of brownies and cookies were delivered and received from different SK Express dispatch riders at various times by narcotic operatives before the final sting operation.

According to the Commander, FCT Command of the Agency, Mohammed Malami Sokoto, follow up raids of their various locations in Gudu, Kubwa, Lokogoma, Apo and Damangazo all in Abuja, led to the seizure of some illicit substances. 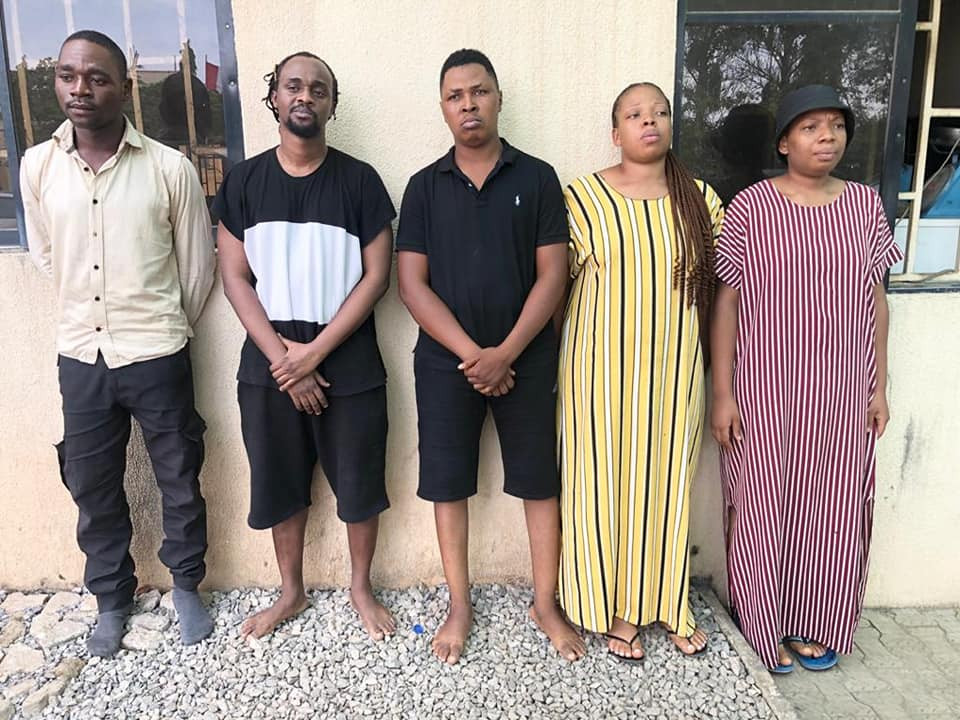 Other items recovered from the syndicate include: a dispatch motorcycle, various equipment for producing cookies and brownies, 10 telephone handsets and two laptops used for online drug trafficking transactions.

Under interrogation, the suspects confessed to have a large platform of customers who order for drugs and drug based cookies, brownies and edibles, on daily basis for parties and ceremonies, in and outside Abuja. They said they use the manager of SK Express courier company to deliver their products through motorcycle riders and power bikers popularly called droppers. They further claimed they have been in the business for over three years.

Meanwhile, operatives of the Ondo state Command of the Agency have intercepted and seized 60kilogrammes of cannabis following intelligence. In the process, a 29-year-old Emmanuel Utaji was arrested at the location on Matado street, Akure, Akure South local government area. Acting Commander of the Agency in the state, Callys Alumona disclosed that the location was raided at about 9:45pm and the suspect arrested when the consignment was to be evacuated and taken outside the state.

In the same vein, a drug dealer and suspected armed robber, Sanusi Abdullahi has been arrested by officers of the Rivers state Command at Iroko village, where 15.8 kilogrammes of skunk and 16 sim cards were recovered from him on Saturday. The state Commander, Rachael Shelleng, stated that further investigation would unravel other criminal activities perpetrated by the suspect.

Reacting to the operational feats, Chairman of NDLEA, Brig. General Mohamed Buba Marwa (Retd) commended the FCT, Ondo and Rivers Commands of the Agency and charged them not to rest on their oars.

“I ‘m particularly impressed with the speed with which the officers of our FCT Command disrupted the online drug trafficking cartel that has been ravaging the nations capital for over three years and I must commend them and their counterparts in Ondo and Rivers for their recent feats.” Marwa stated on Sunday.

After A Mad Woman Went Into Labour, See Throwback Photos Of The Cute Baby...