Nollywood actress Victoria Inyama has taken to social media to mock her colleague Etinosa Idemudia over her crashed second marriage.

Etinosa and Victoria have been at loggerhead for a long times after the latter made a mockery of the single mothers when she welcomed her baby.

Victoria Inyama, at the period when Etinosa welcomed her baby, congratulated her and welcomed her to the single mother’s world after she failed to unveil her husband.

Responding to the message, Etinosa slammed Victoria, stating she has no business with the single mothers as she is a married woman.

Victoria Inyama, in a post shared on her Instagram page, threw a shade at Etinosa while urging her fans to be careful of their words because they will never know when they will eat them.

She added that people should not make a mockery of the pain they have not experienced.

In her words: Make Sweet the Words that come out of your mouth because You Never know When You Eat them……
In her words and l quote ‘wetin concern married woman with single mother ‘……….
NEVER MOCK A PAIN YOU HAVE NOT EXPERIENCED ‘…

Yarngist had earlier reported that the 6months old marriage of Nollywood actress Etinosa Idemudia and her new husband (Who Fathered her beautiful daughter) has crashed.

According to information gathered, the husband whose first name is Ighorosa and the actress are parted ways a few months ago due to Irreconcilable differences. Since the breakup, the actress has left Benin and returned to Lagos with her daughter.

Etinosa and Ighorosa got married very quietly traditionally in September 2020 and in December 2020 they welcomed their daughter. Reacting to the news, the mum of one confirmed that she is indeed no longer married to her second husband. 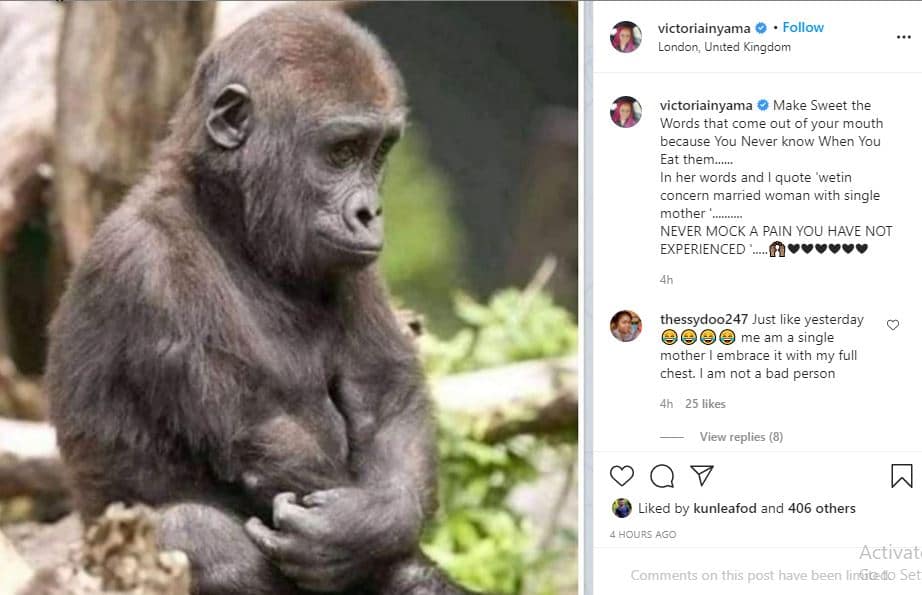 You Are Talking Nonsense – Tonto Dikeh Replies Troll Who Accused Her Of Misleading...

I Married Her Because She Got Pregnant And Said I Will Have No Claim...